Adam Beck is an educator and parent who has worked with hundreds of bilingual children over the past 15 years. He lives in Hiroshima with his wife and two children. We at Bilingual By Music really enjoy reading his blogposts and he offers great ideas and inspiration for parents who want to raise their kids bilingual. We are very grateful that Adam allows us to repost his work here.

Here is a blog Adam wrote during a visit to his own parents who live in the USA. In his own words:

“Toward that end, I thought I would share  three main ways that I try to bridge this distance and facilitate a connection between my children and my parents, a connection that not only nurtures the loving bond between them, it gives a regular boost to my children’s language ability”

Today, technology offers an easy and inexpensive way to share photos and video clips with grateful grandparents. I’ve used Google’s Picasa for several years, posting a new batch of photos and video online every month or so. By giving my parents this regular peek into their grandchildren’s lives, I’ve been able to bring the two generations closer, at least emotionally.

Of course, there are a range of options for sharing photos and video these days, but I’ve been very satisfied with Picasa for these reasons…

If you’re not regularly sharing photos and video clips of your kids with their grandparents, I highly recommend giving Picasa and YouTube a go. It doesn’t get much easier (or cheaper) than this, and once the pieces are in place and you’re familiar with the process, maintaining the routine is almost effortless. For a minimal investment of time and expense, the payoff is priceless!

A regular routine of video chats via Skype can create wonderful opportunities for face-to-face communication between grandparents and grandchildren. 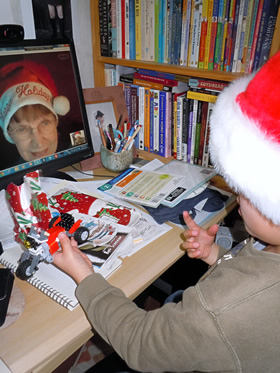 To this point, we’ve been using Skype maybe twice a month, mainly to catch up with my mother—though I hope to get a similar connection going with my father, too. Although the image quality of our chats could be better (I think that’s largely a function of the quality of the computers and webcams involved), Skype has been a valuable way of strengthening ties while providing my kids with a chance to exercise their spoken ability in the minority language. And the fact that photos and video clips are being shared regularly through Picasa and YouTube makes it easier to engage in conversation, since the grandparents then have a vivid idea of what their grandchildren have been doing of late.

Skype, too, is easy to use and setting up an account, and video chats with others, is generally straightforward. Both the Skype software and the chats themselves are free. 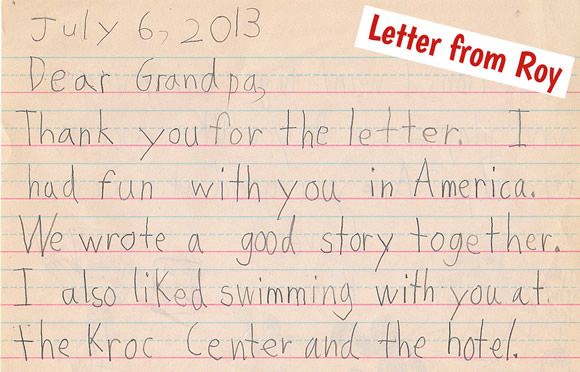 3. Establish an exchange of handwritten letters

Handwritten letters between grandparents and grandchildren not only deepen the emotional bond here in the present, the letters themselves can become cherished mementos of this bond for the future. Meanwhile, the children are receiving a regular workout in both reading and writing.

Because Lulu and Roy can both write reasonably well for their age (9 and 6 as of this post), I’ve been helping them exchange letters with their grandparents for over a year. Though email has been used, too, from time to time, I’m far more eager to facilitate the exchange of letters for these reasons…

Exchanging letters takes some diligence, it’s true—and parents must be actively engaged in helping their children produce timely replies—but the gains to the relationship between grandparents and grandchildren, now and to posterity, as well as the meaningful language use it encourages, make this well worth the effort for all involved.

Adam Beck is the blogger of Bilingual Monkeys (http://bilingualmonkeys.com/) , a site of “ideas and inspiration for raising bilingual kids (without going bananas).” A former teacher at Hiroshima International School, and now a freelance writer, Adam is the father of two bilingual children.